Badminton specific profiling
An illustration of how we evaluate players

What is profiling and why is it useful?

Profiling, in any sport, is a method of quantifying player performance using specific parameters across different verticals. The overall success of a player is a combination of multiple skillsets working together. For example, technical skills, tactical skills, physical skills, mental skills etc. Profiling allows us to quantify these skills using a group of tests for each of the skillset. The specific tests for each skillset can be based both on a scientific gold standard for testing a particular aspect (For example, a VO2 max test for measuring aerobic capacity) and also on coach/athlete experience. It is important to acknowledge that achieving success (winning more points, games, tournaments) can be achieved in multiple different ways, with multiple approaches. There is no one fixed way that works for everyone. For example, while some players are more physically capable (faster, stronger, more agile), others might rely more on their tactical aptitude. Profiling helps us identify individual strengths and weaknesses and then design training plans and match strategies to utilize them to achieve success on the field.

Also, very frequently, coaches/athletes adopt a very qualitative approach to training based on their own experience in the sport regarding what works and what doesn’t. This often makes it difficult to track a player’s progress over the span of time and understand whether the current training plan is helping to train the necessary skills. Profiling is a tool to characterize, compare performance between players and also track it over a period of time.

The results of profiling can be used to develop individualized training plans for every player with a very specific purpose. Thus, we can use a recursive process to set a S.M.A.R.T goals (Specific, Measurable, Achievable, Relevant, Time-bound) and use profiling as a tool to develop training plans (refer figure 1). 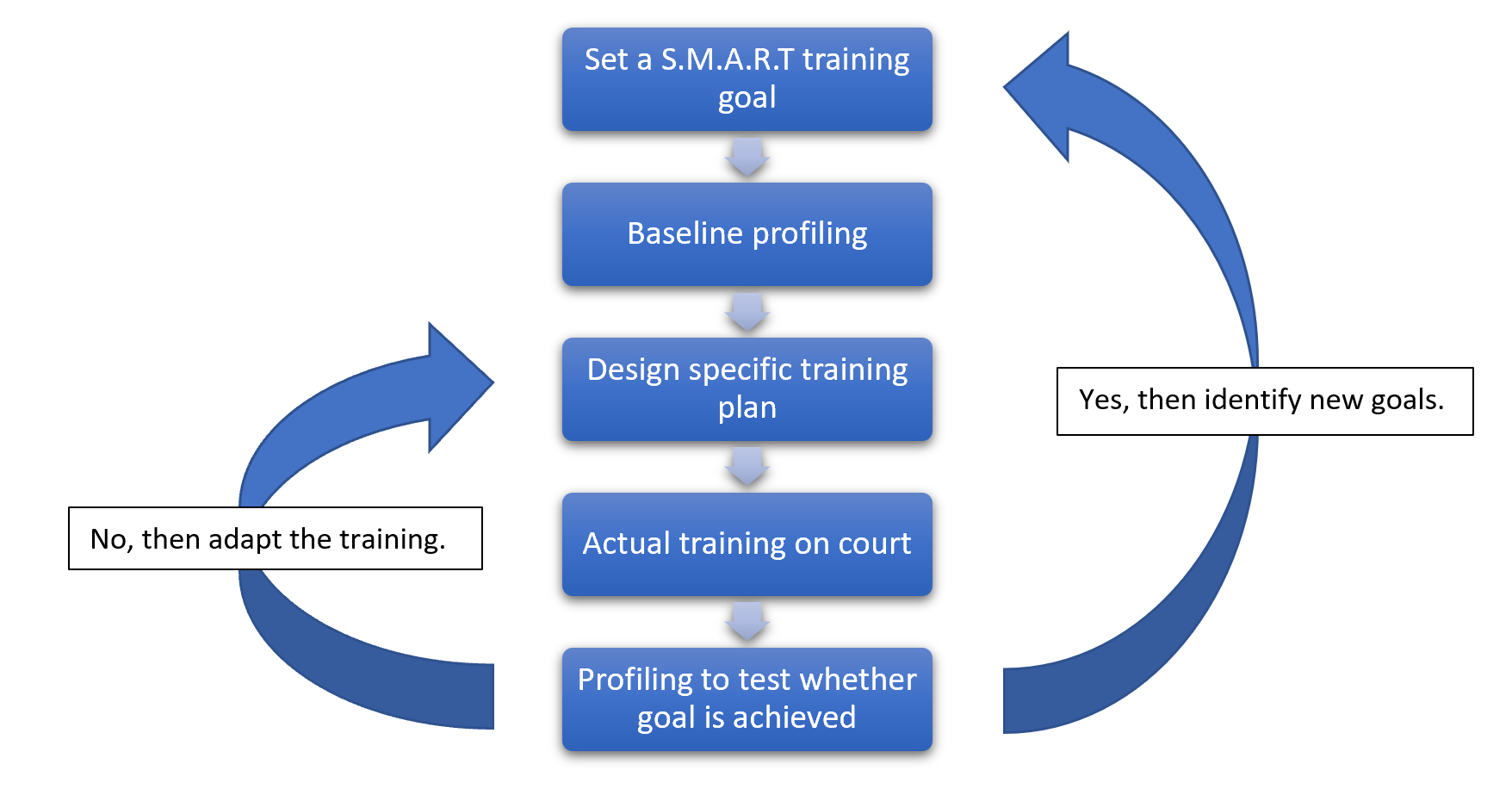 At Badmintoo.com, we offer a player profiling service to quantify player performance using tests tailored specifically to badminton. Player performance is categorized into these four verticals –

Let’s delve deeper into each one of these.

In technical profiling, we look to quantify the technique of all the common strokes in badminton. For doing this, we rate the following parameters in each stroke – 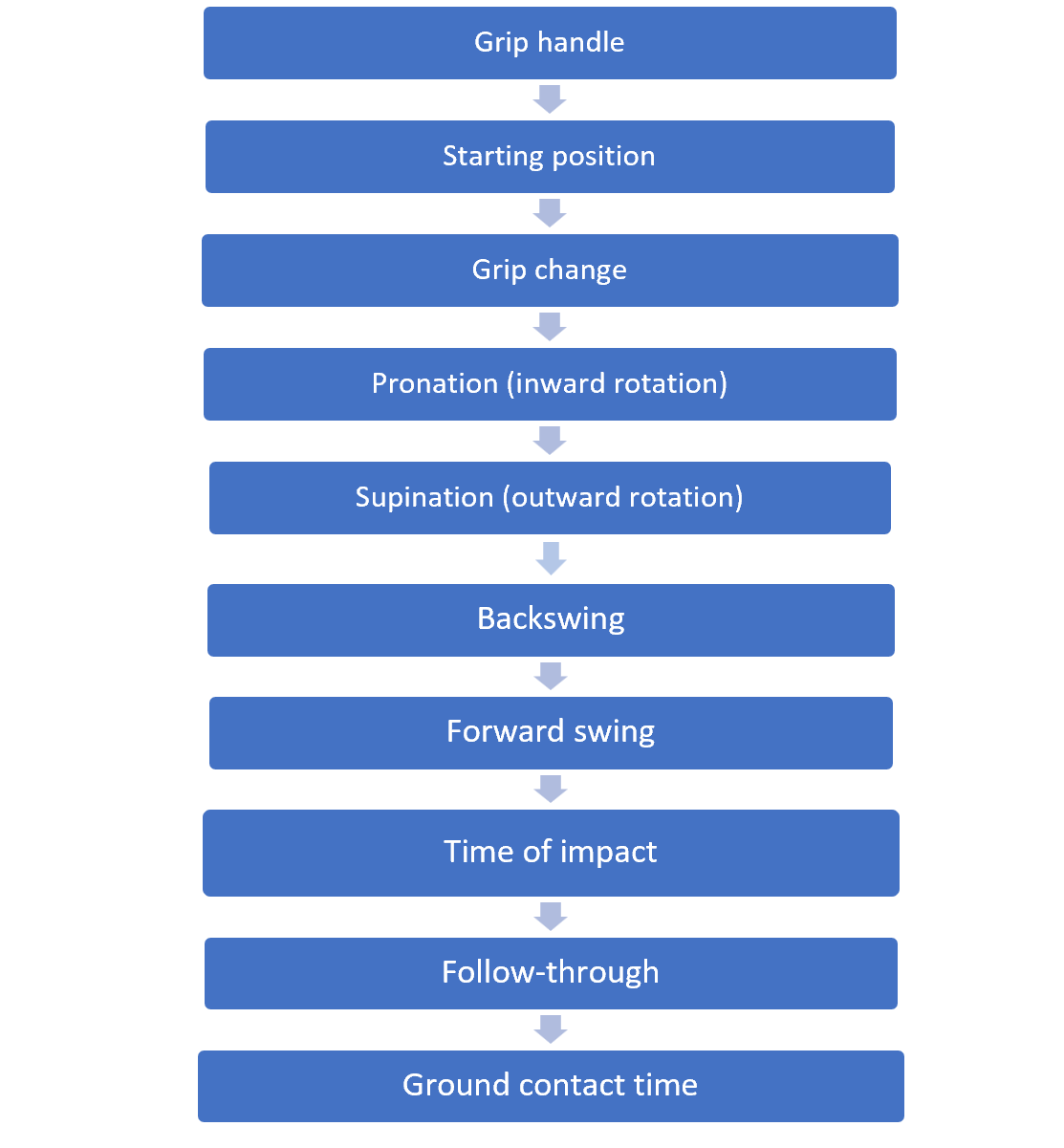 To observe different strokes, we ask the player to perform a simple of set of on-court badminton specific drills (specified by us in detail), performing different strokes and record these videos from 2-4 different camera angles (specified by us). Replaying the videos, the above 10 parameters are rated by an expert badminton coach and an overall score per stroke is calculated. We are mindful of the fact that in each stroke, the importance of each of these 10 parameters and their effect on successfully performing that stroke is different. Hence, the importance of individual parameters is also considered in our analysis. After getting an overall score for each stroke, a diagram (figure 2) is presented as an output. 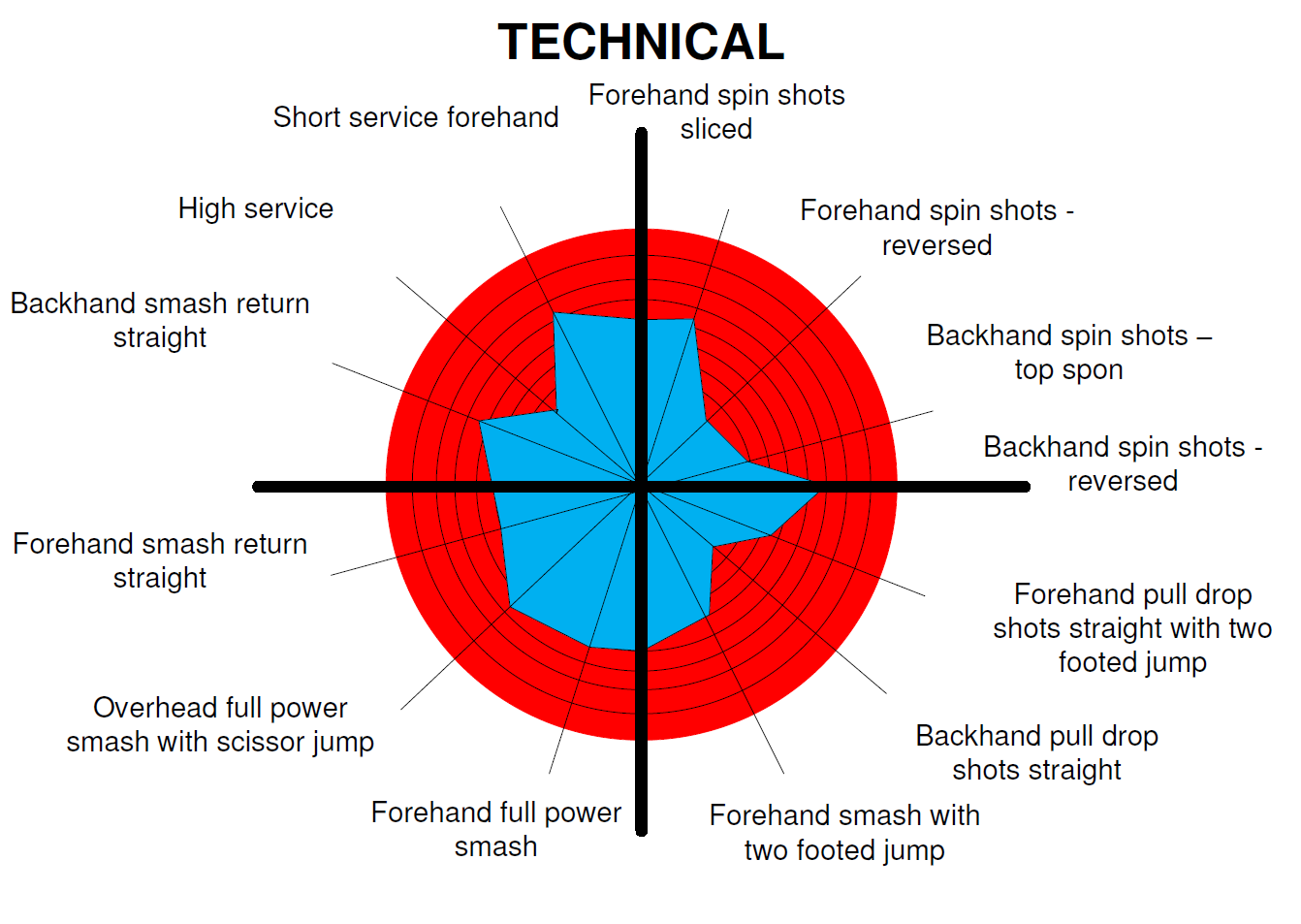 In the physical profiling, we ask the player to perform a set of exercises that simulate the metabolic load that a player experiences in a 3-set badminton match. While doing so, their video is recorded and their heart rate, lactate profile is monitored. A Rating of Perceived Exertion (RPE) is noted at different points in each exercise. We also observe the ground contact time of the players and how it changes during the exercise. The load is different for players at different levels and the length and intensity of the exercises is adjusted accordingly. The exercises are divided into three parts –

1. Simulation of first set – Based on notational analysis data at different levels, the players perform an on-court badminton specific exercise.

2. Simulation of second set – For this, the player performs a VO2 max test and Wingate test on a treadmill to push the player to their peak aerobic and anaerobic capacity. The intensity and duration is specified by us based on the level of the player.

3. Simulation of third set - In this, the player performs an exercise like the first set simulation, however it is after their aerobic and anaerobic capacities have been optimally pushed.

The aerobic power, aerobic capacity, anaerobic power and anaerobic capacity of the player is calculated from the collected data. We also observe changes in coordination, and speed from the recorded footage. A few separate exercises can also be used to evaluate general strength and range of motion. There is also a provision to observe daily and competition nutrition of the player. At the end, the data is collated and a specific rating for each of the parameters is calculated and represented in a diagram (Figure 3). 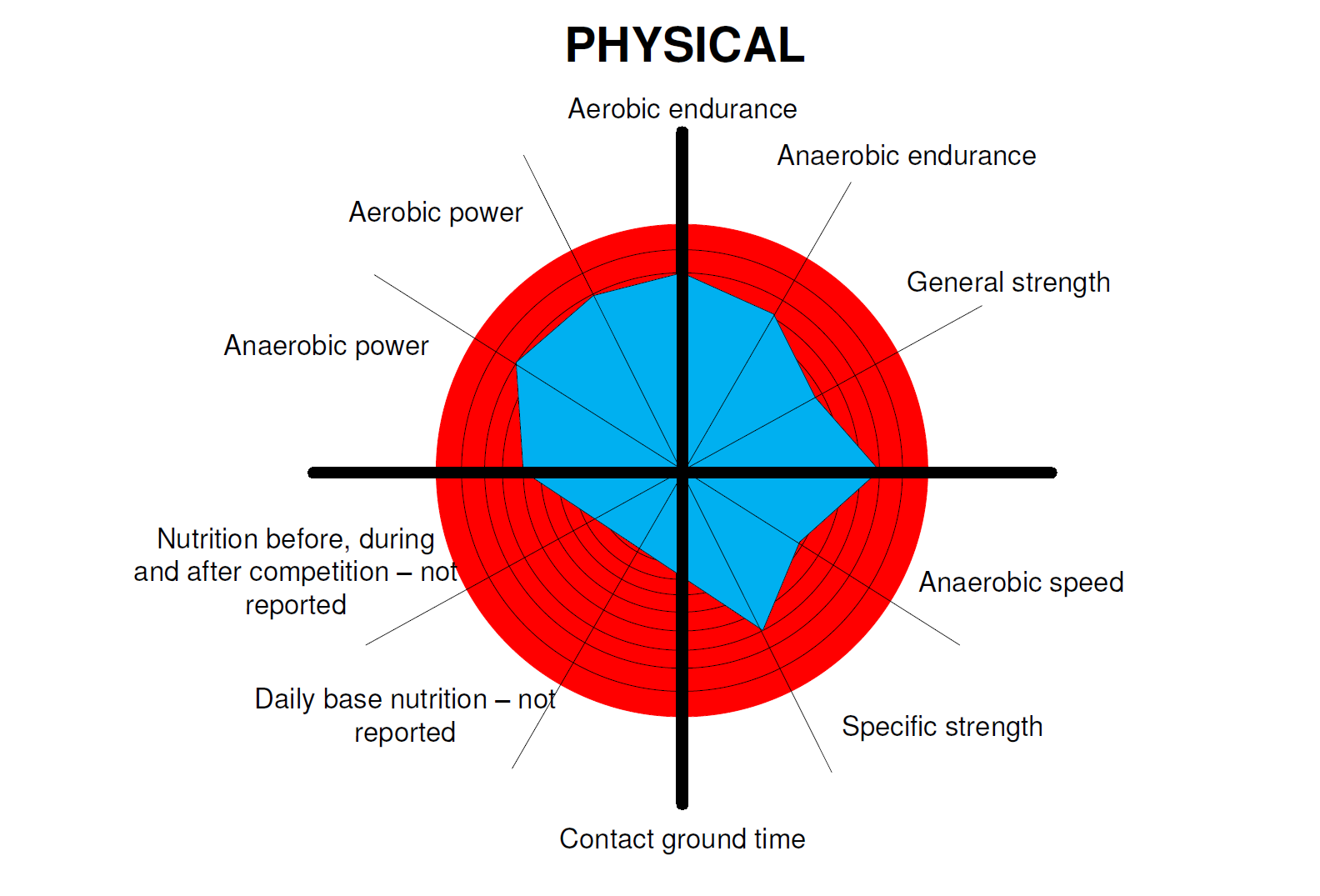 The tactical testing involves analysing the recognition and decision-making skills of the player in the context of specific tactical situations in a match-like situation. Any decision is considered a good decision if the player is tactically aware of the situation and how playing a particular choice of shot in that situation can influence the outcome of the rally.

To assess a player’s tactical awareness, the players perform a set of simple badminton-specific drills on court and their decisions in each situation are evaluated. For example, the shot choice of the players when they change from a 50-50 situation to a constructive offensive situation is observed and their awareness is rated. The player’s objective in every scenario should always be to move upwards on the diagram to more tactically offensive situations. Any shot choice that deteriorates a player’s tactical situation further is considered a tactical mistake. At the end, based on set guidelines, a subjective rating is assigned to the player’s behaviour in each tactical situation and the output is represented diagrammatically (figure 5). 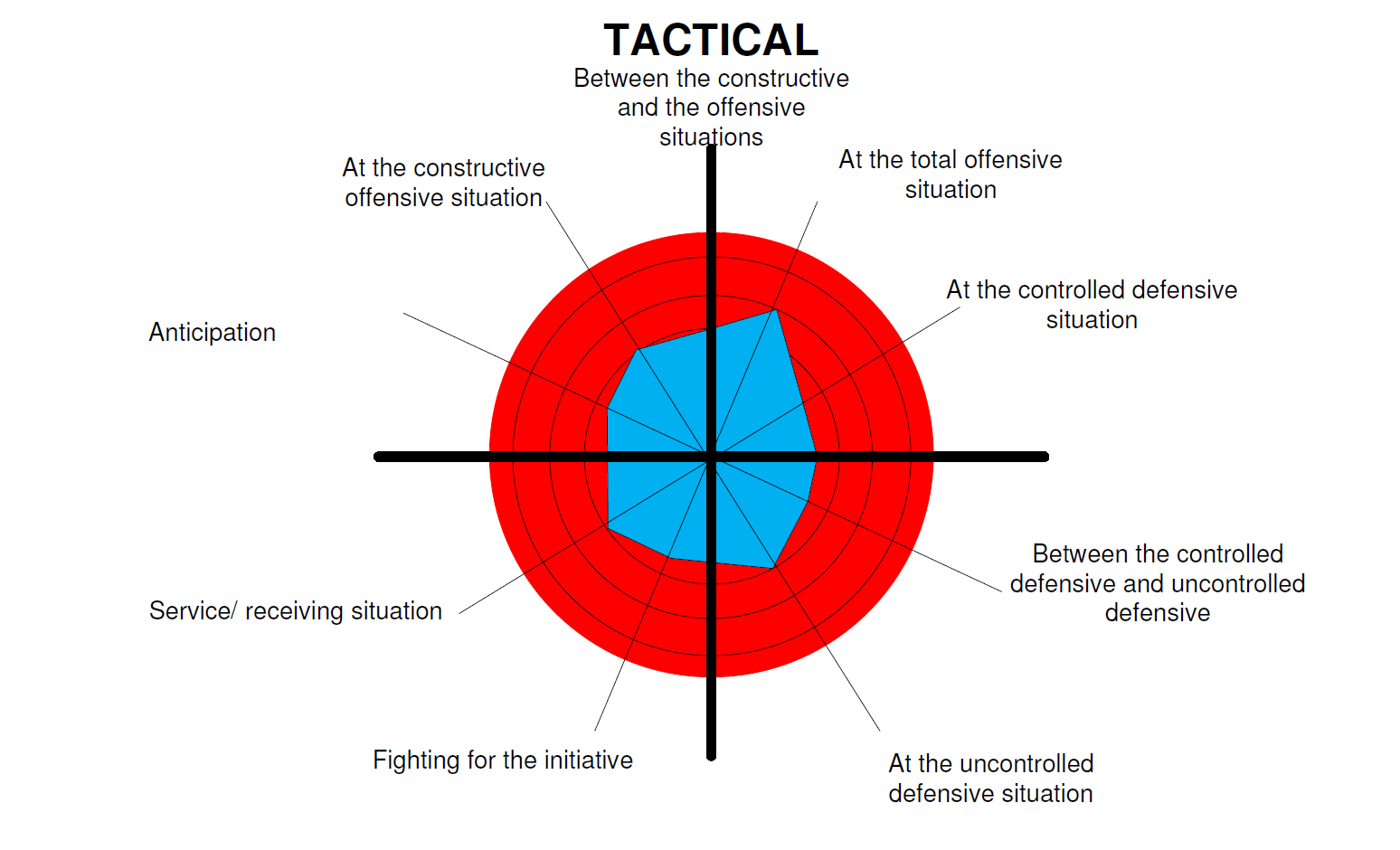 Figure 5: Output of the tactical profiling

The mental skills of the players are analysed based on the psychometrically sound Ottawa Mental Skills Assessment Tool 3 (OMSAT 3). The test is a set of questions answered by the player that assess the foundational skills, performance skills, personal development skills and team skills of the players. Based on set guidelines (Handbook of Sports Psychology, Tenenbaum & Eklund, 2007), the players’ responses are rated from 1 to 5.

The following diagram represents the qualities assessed by the test – 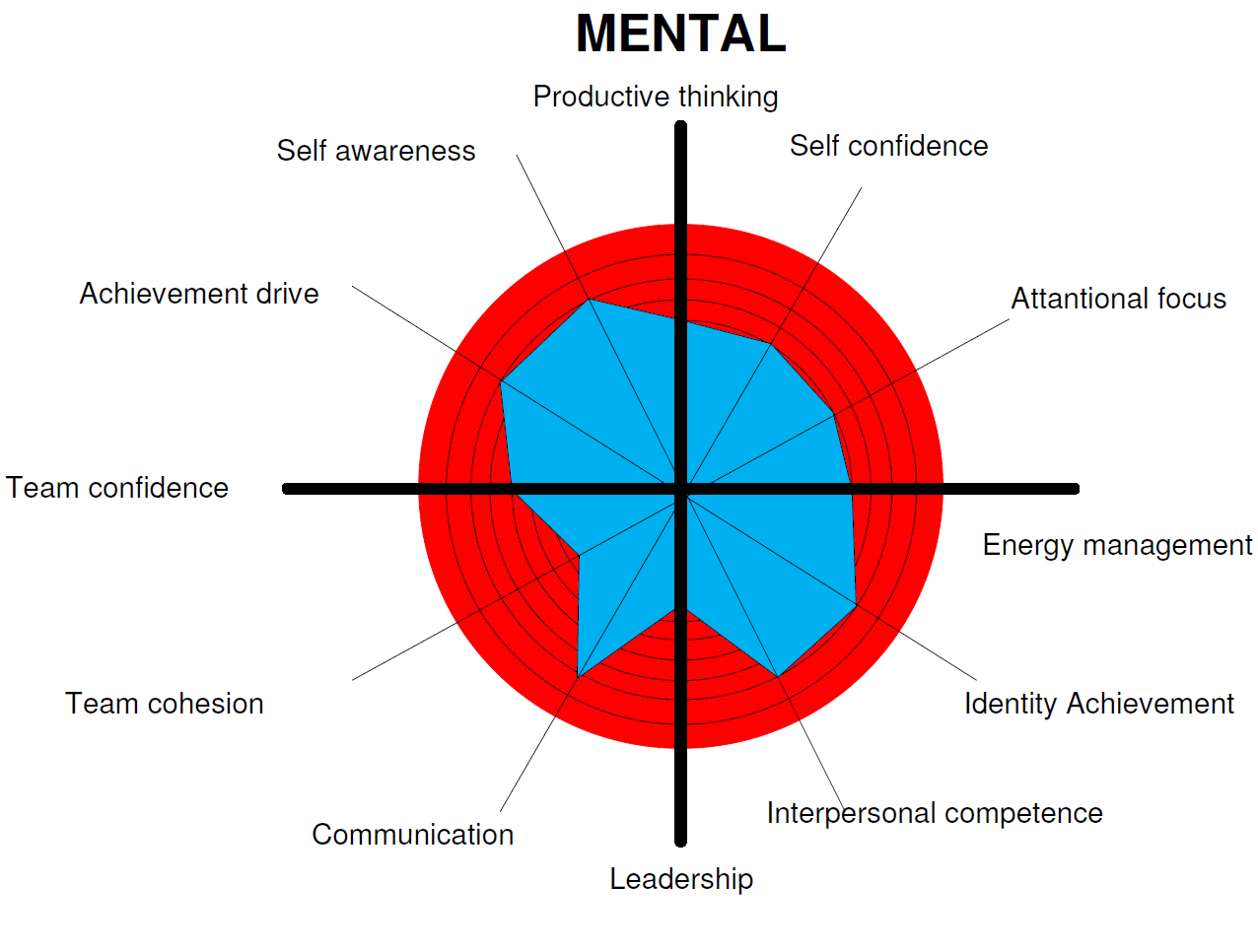 Once we have the results of the profiling, we can identify the difference between current performance and target performance. Using scientifically approved planning and periodization methods, we can then develop a personalized training plan for the individual specifying all the included drills (both on-court and off the court), their purpose, training intensity, training duration in detail. After implementing the training drills for the specified period, the player would be profiled again to observe changes in performance.

Stay tuned to badmintoo.com to find out how we create these individualized training plans!